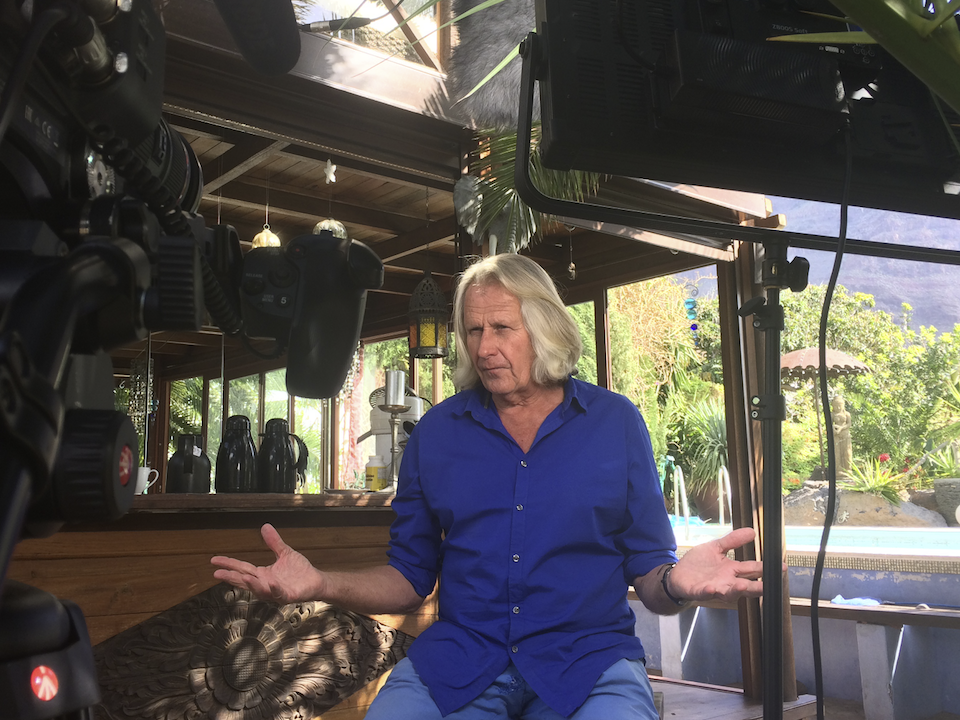 The best part of my job as filmmaker and CEO of Indievisuals Film Production is that it takes me all around the world. We are based near Frankfurt Germany, yet I am lucky enough to visit numerous beautiful places on all continents of the world, meet interesting people with amazing stories and experience their fascinating cultures. These situations give me the drive and energy necessary to tell powerful stories with moving images. 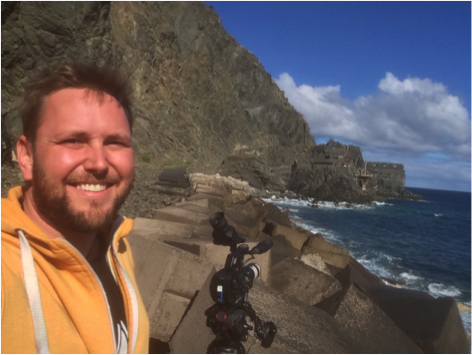 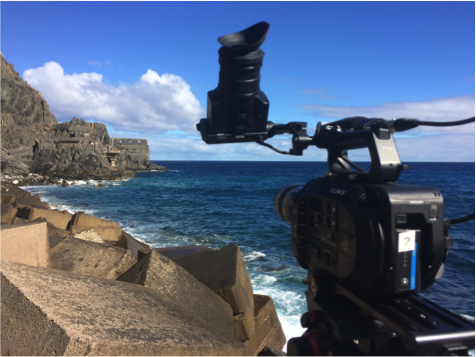 Here I am working on a documentary in La Gomera, January 2017.
At www.indievisuals.de we produce high-end commercials, image films, music videos and documentaries. Most of my documentary work for is for German TV and is shot on my Sony FS7 and A7SII. Despite the amazing dynamic range and high ISO’s modern digital cameras provide, sensors are still not as sensitive and versatile as our eyes and depending on the location, images often have to be lit to make a shot more dramatic. Great images consist of composition and contrast. Where there is light there is shadow and it is important to create depth to make exciting shots. Available light is beautiful, but you will often find yourself needing artificial light sources to create great shots. 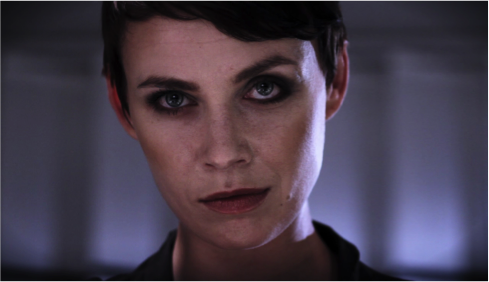 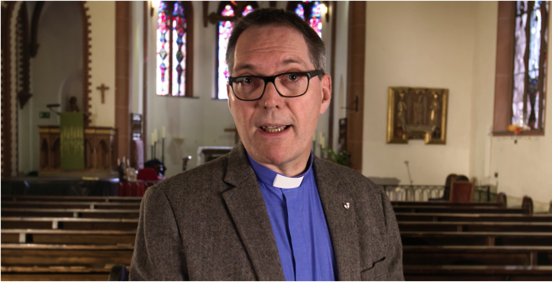 Screenshot from Indievisuals short film (top) and Indievisuals documentary (bottom) lit using F&V panel lights amongst others.
The following review demonstrates how I used the F&V Z800S Soft light on my latest documentary shoot about the wonderful island La Gomera, shot for German TV in collaboration with Arche Noah Film Production, directed by Ronald Urbanczyk. I will use ungraded snapshots shot with an IPhone 5S, that I made to show the lighting setup.
For about 5 years know I have been using the soft panel lights by F&V. I have three F&V K4000 daylight units and used to have 2 K8000 Plus LED Bicolor Studio panels, which I recently exchanged for a set of two Z800S Ultracolor Soft lights. I have to say the value for money is amazing. I measured the color temperature exactly at the old film rental company I used to work for and the light quality and color precision can compare with way more expensive models by other brands. I love the flexibility they give me to be creative, especially because I can fit one in my regular suitcase, which saves the costs of extra overweight baggage: 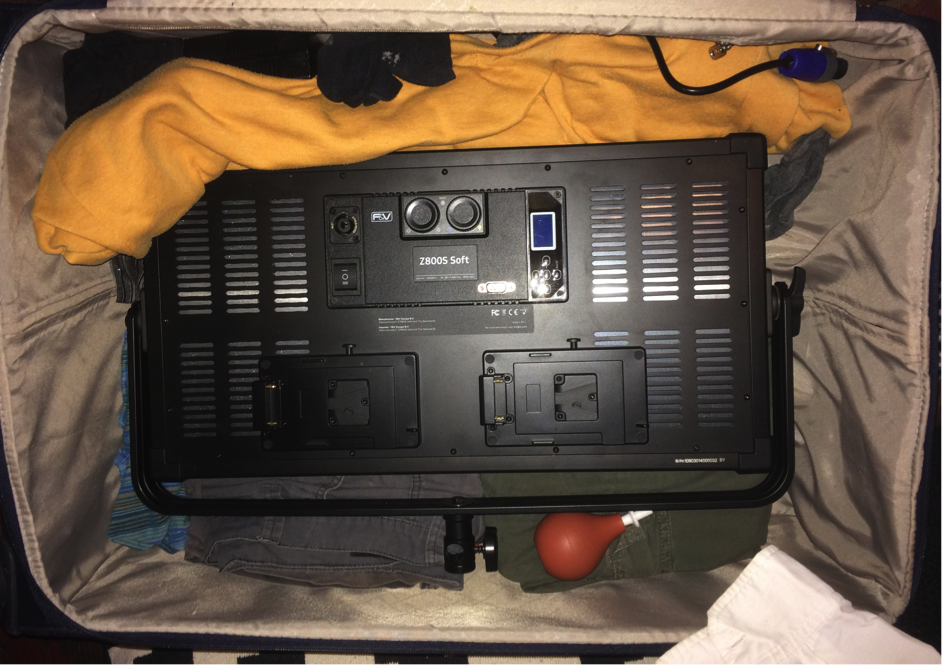 Before this the AC adaptor dangled in the air and had to be attached to the light stand with Gaffer. This new setup is way more elegant and the power cable is much longer, which is also very handy. F&V obviously listens to professionals who make suggestions. 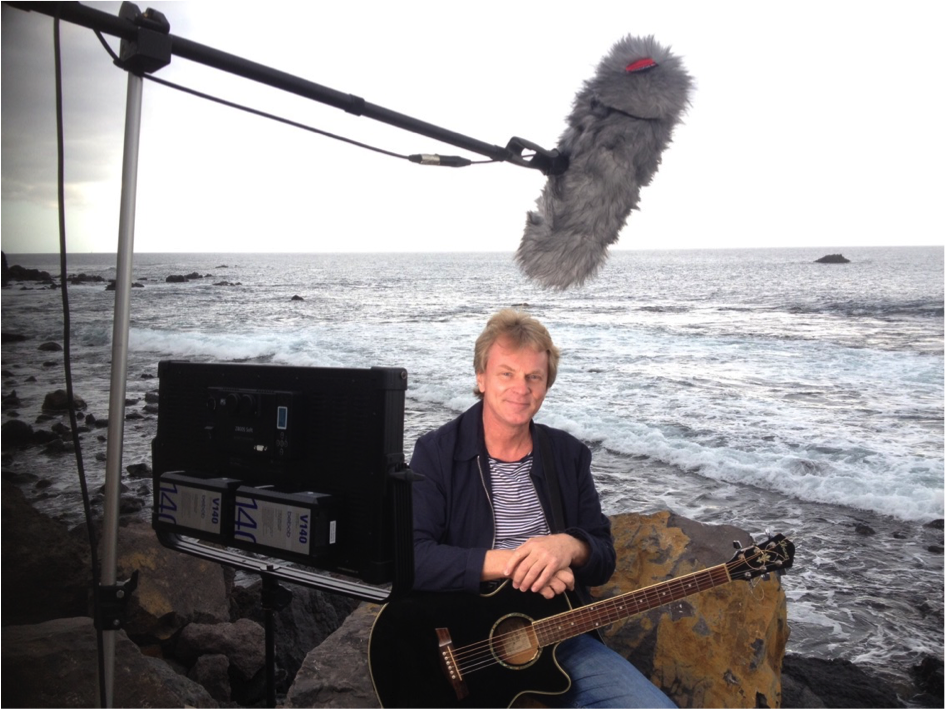 In this interview setup the musician was sitting in a shadowy area and the background was too bright in comparison. I pushed in the Z800S as close as possible to raise the levels on his skin, so the sky would not overexpose. This also created nice light direction and contrast, making the image more interesting. Shadows can help make a face look less flat.

Often when shooting documentary films I work with small teams of 2-3 people, sometimes even on my own. So my gear has to be light and battery powered. Often on such a production I will only take one light, which has to suffice. This is where my F&V lighting units come in very handy. Any experienced documentary cameraman will agree: available light can be beautiful when shooting outside, depending on the time and place. Sometimes it destroys the authenticity of the moment to light a certain situation artificially and I am all about authentic moments. Most people in documentaries are not as experienced as actors are and feel a bit strange being followed around by the camera. Lighting units do not help when you are fishing for real emotions from people who are inexperienced with cameras. Also when shooting in broad daylight you will often need heavy HMI units to work against the intense sun rays. This is ok for a feature film or commercial shot with a larger team, but not for a small documentary team. When shooting documentary, I have to be quick in finding great angles and emotions. Quite often nothing is planned and I have to find my shots there and then, there is no time to repeat anything, which would destroy the reality of a moment. I do however use lights whenever possible. Sometimes I will have my assistant quickly push the light in and out according to my angle. This is only possible with cable less lightweight units like the F&V Z800S. 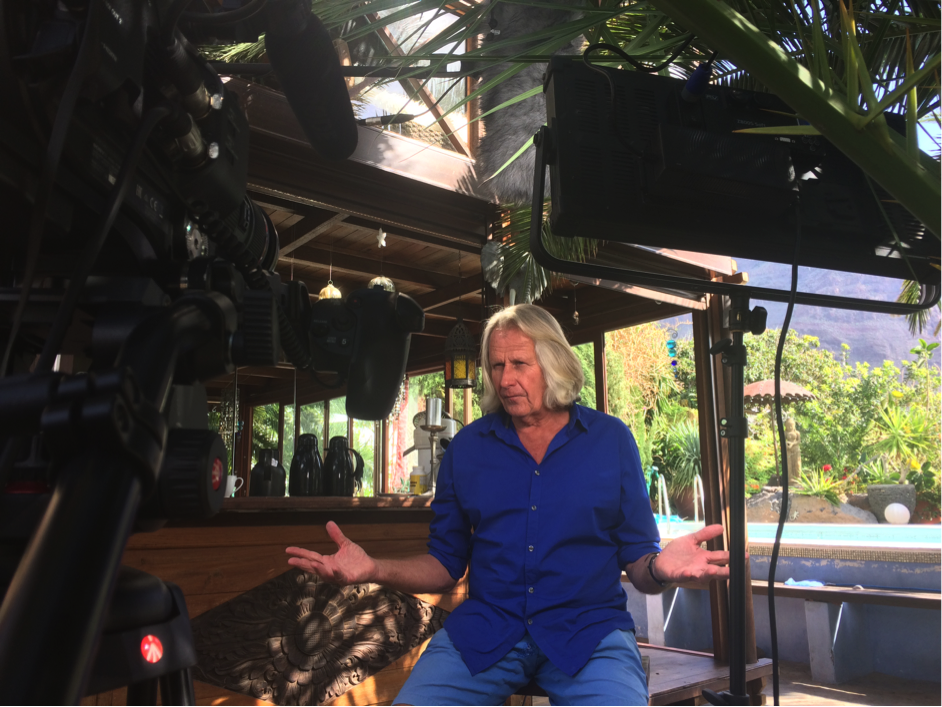 This interview was shot against the sun and again my protagonist was sitting in a shadowy area, nicely protected from the harsh sunrays. In this case I decided to use the shadow, so the direct sunlight could not create ugly shadows. Also it was important for the director to have the hut behind in frame. Without artificial light the protagonist would have been a silhouette, or the background would have blown out completely. Shooting outside in the bright sun, especially midday can be a problem. Your interviewee has to sit or stand for about an hour, so you don’t want them to be in the direct light. In midday the direction of the light is very steep and causes ugly shadows on faces. Mornings or evenings, when the light is nice and soft and comes from a flat angle, are the best times to shoot an interview. Most of the time however, you simply have to deal with the situation at hand. People cannot always be available at the perfect time for you. So you need to improvise and thanks to the Z800S this was possible. 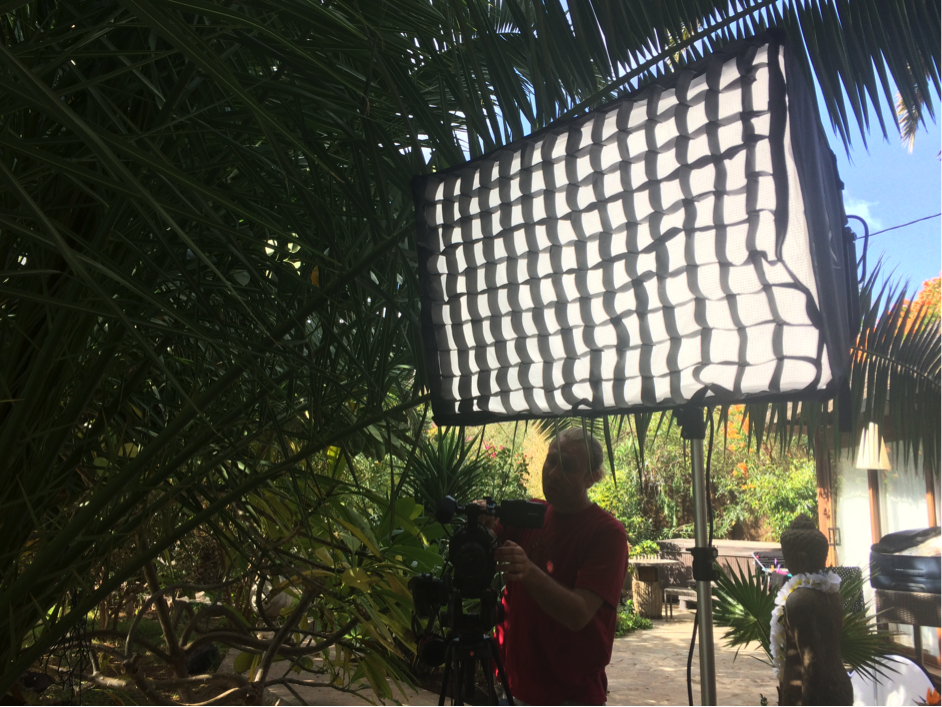 The new soft box and egg crate available for the Z800S are quick and easy to setup. They minimize spill, make the light even softer and give it stronger direction. If you decide to take off the white diffusion and just use the box as a tunnel, the light will be intensified by the silver lining inside, which can be useful when you need that extra bit of light intensity shooting outside in the sun. 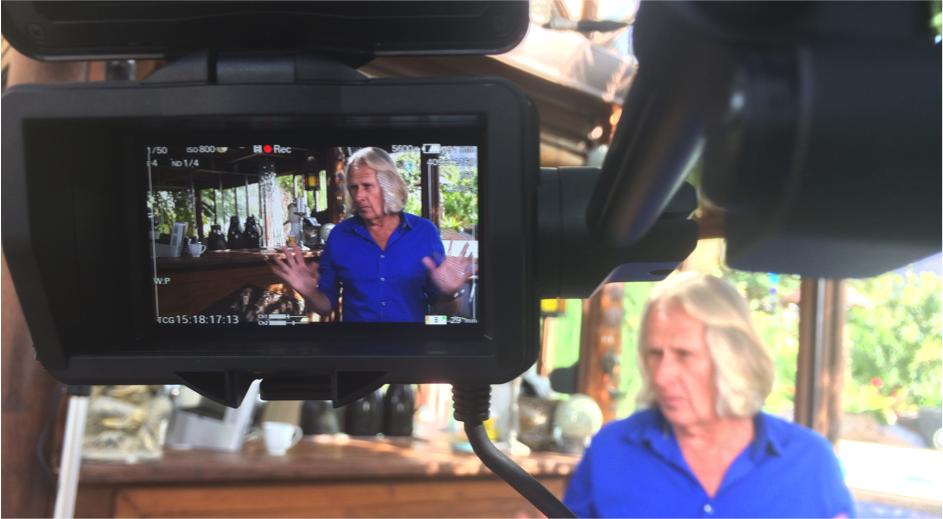 Some stories might require you to shoot inside and often due to sound issues you will be forced to go inside, where there are less distractions for the interviewee and you have less traffic problems to deal with etc. When working inside you will have to use artificial light unless it will lack in style. Most available light sources are positioned in a bad place, lack direction and are simply not color corrected. Contrast and skin tones will look horrendous, unless you use professional lighting 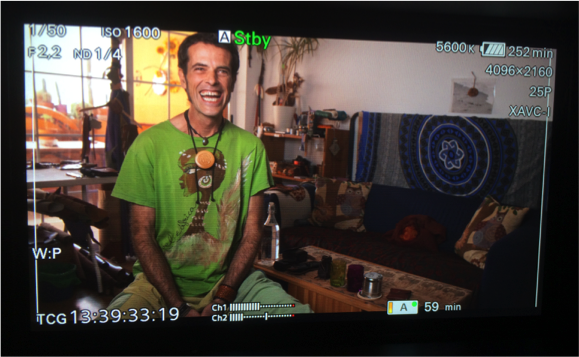 When shooting interviews I normally have enough time to position the protagonist where I want, light the scene accordingly and pay attention to little details. It is important to put your talent in a nice light, get the skin tones correct and create some exciting contrast between back and foreground. Unlike shooting spontaneous situations, lighting interviews does not destroy the authenticity of the moment, because a nicely framed interview is a stylistic decision that takes time to set up anyway. It will often be a new situation for the person talking, so you must allow them enough time to get used to it. I always try to make these situations look as less lit as possible, so soft light is a bonus when working fast. The regular viewer might not even notice the light, but the image will flatter the interviewee and help put him or her in the foreground.

That’s it for now. If you have any questions, please feel free to contact me here: